Few gemstones other than jade, agate, jasper and a few others were reported in Wyoming prior to 1975. In 1975, another gem was found: diamond. Since 1977, efforts by the Wyoming State Geological Survey (WSGS) resulted in the discovery and/or recognition of additional diamond deposits as well as sapphire, ruby, peridot, aquamarine and helidor beryl, iolite, pyrope, pyrope-almandine, chromian diopside and chromian enstatite. In addition, jewelry-grade gold nuggets, labradorite, opal variscite, minyulite, amethyst and several varieties of jasper and agate (Figure 1) have also been recognized by various rock hounds and the WSGS (Hausel and Sutherland, 2000).

Gemstones represent some of the more valuable commodities on earth. Knowing the geological conditions and environment where certain gemstones are found can lead to new discoveries (Kievlenko 2003; Walton 2003; Hausel and Sutherland, 2006). One recent discovery in the Canadian Shield (Krajick 2002) led to a multi-billion dollar Canadian diamond industry where none existed prior to 1998. In recent years, the value of gemstones has reached record heights. For example, a 0.95-carat purplish-red diamond sold for approximately $1 million. Putting this in perspective, one carat equals 0.2 gram or 0.007 ounce, thus this diamond sold for more than 285,000 times an equivalent weight in gold (at $500/ounce)! Another stone, a near perfect 8.01-carat Burmese ruby, sold at Christie’s of New York for $2.2 million (>78,000 times an equivalent weight in gold)! A necklace with 27 emerald-green jadeite beads sold in Hong Kong for $9.3 million and a 2-inch diameter jadeite bangle sold at a Christie’s auction in Hong Kong for $2,576,600 (Hughes and others, 2000). Ward (2001) reported the sale of a 35.8 mm jadeite cabochon for $1.74 million! With such incredible value, the economic geologist should be aware of the geology, gemology, and marketing of these unique minerals.

Diamonds were discovered in Wyoming in 1975 following the recovery of micro-diamonds from a garnet lherzolite nodule in kimberlite south of Laramie during a research project by M.E. McCallum and Chuck Mabarak at CSU (McCallum and Mabarak, 1976). Using traditional exploration techniques, more than 100 kimberlites have been found in Colorado and Wyoming since 1960. Even so, many of these have not been tested for diamond nor have most of the several hundred mineralogical, geophysical, geomorphic, vegetation and remote sensing anomalies that are interpreted to be related to kimberlite (Hausel, 1998a). Wyoming could easily host a major diamond province, but we may never know unless effort is made to budget for the testing of these hundreds of anomalies.

Within this province, the WSGS mapped the two largest kimberlite districts in the US (Hausel and others 1981; Hausel and others 2003), the largest lamproite field in North America (Coopersmith and others 2003; Hausel, 2006b) and investigated a cluster of diamondiferous lamprophyres (Hausel and others, 1999) as follow-up studies to projects at CSU, U of Colorado, U of Utah and private industry. Twenty-two in situ and some detrital diamond deposits have now been identified in Wyoming; many contain both gem-quality and industrial diamonds. In total, more than 130,000 diamonds have been recovered from kimberlites and placers in the State Line district, while the Kelsey Lake diamond mine produced some fabulous gems that ranged from <1 to a 28.3 carats (Figure 2).

Other gemstones associated with kimberlites and lamprophyres include ‘Cape ruby’ and ‘Cape emerald’. ‘Cape ruby’ and ‘Cape emerald’ are actually pyrope, pyrope-almandine and spes-sartine garnets and emerald green chromian diopside and chromian enstatite (Figure 3). These were initially recognized as gems in the diamond fields of southern Africa and represent part of the kimberlitic indicator mineral suite used in exploration.

The garnets are burgundy, red, reddish purple and yellow orange (Figure 4). Because of their relatively high hardness and specific gravity, they produce durable gems that are recovered from stream sediment con-centrates as well as directly from kimberlite and some lamprophyres. The gems range from tiny microscopic grains to rare nodules up to 4 inches in diameter; most are small, typically <0.25 inch in diameter. The color and fire of the Wyoming pyropes rival the best quality pyrope gems in the world and often produce better gems than the well-known Bohemian garnets. Some chromian diopside produces spectacular emerald green gems. The better gems found are 1 to 8 mm (0.3 inches) rounded grains in anthills in the Greater Green River and Bighorn basins (Figure 5). These are also found in the Bishop Conglomerate (Oligocene), stream alluvium, and in a small group of diamondiferous breccia pipes along the edge of Cedar Mountain where gems are as large as 12 mm (0.5 inch) across (McCandless and others 1995).

Figure 4.(b) Burgundy and orange garnets cut from gems collected from anthills in the Green River Basin.

Gem-quality peridot (olivine) was identified by the WSGS in lamproite in the Leucite Hills of the Green River Basin in 1998. The peridot is olive green, yellow-green and reddish-brown and produces excellent gemstones (Figure 6). Even though olivine had been described in lamproites in the Leucite Hills as early as 1887 (Cross, 1897), the gem-character of the mineral went unnoticed until recognized by the author. Hundreds of excellent, transparent peridot grains were found in anthills. Many grains are quite clear, while others are frosted with uncommon striations. During the discovery of the peridot, two anthills collected adjacent to the Black Rock lamproite flow yielded more than 13,000 carats of olivine in grains from 2 to 8 mm in length (Hausel, 1998b). The 8 mm grains are the maximum size that could be sampled by the ants: larger grains occur in nearby soils and in outcrop.

Wyoming could host the world’s largest resources of iolite. Iolite, a gem-variety of cordierite, is also referred to as dichorite and water sapphire by gemologists. It forms beautiful gems that mimic oriental sapphire (Figure 7). Unlike sapphire, transparent sapphire-blue iolite lacks fire. It also exhibits marked pleochroism such that the mineral will change from sapphire-blue to violet-blue to gray-blue when rotated in natural light, enhancing its value as a gemstone (Hausel, 2005b, 2006b).

The iolite occurs near other alumino-silicates (kyanite and sillimanite). These are found in alumina-rich mica schists (metapelites) that have been subjected to amphibolite- to granulite-facies metamorphism. Cordierite is meta-morphogenic, but has also been described as a replacement mineral in alumina-rich rocks of the Laramie Range anorthosite complex. Significant specimens were discovered by the author in 1996 at Palmer Canyon in the central Laramie Range (Hausel 2005a). Since that time, additional occurrences were identified at Grizzly Creek to the south.

The two largest rough iolites in the world were collected at Palmer Canyon and Grizzly Creek. One is a very high quality gem of 1714 carats (Figure 8): the other is fractured, but weighs >24,160 carats. Larger masses in outcrop provide potential for rough material >100,000 carats. The extent of these two deposits is restricted.

Another deposit was identified south of Grizzly Creek in the Laramie Range anorthosite. This deposit remains essentially unexplored for gems, and only minor granular gem-quality iolite has been identified to date. However, this deposit was reported by Newhouse and Hagner (1949) to contain >453,600 tons of cordierite (a potential resource of >2.0 trillion carats?). Possibly, this is the deposit that was briefly described by Sinkankas (1959). Other cordierite (iolite?) deposits are reported north of Palmer Canyon.

7. (a) Some of the first iolite gemstones faceted from material collected at Palmer Canyon 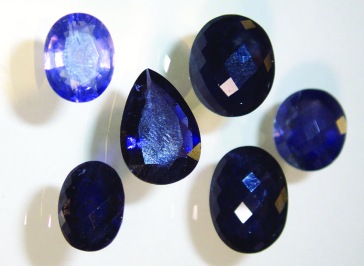 7. (b) sampling of iolite gems (1 to 3 carats) from central Laramie Range (photo courtesy of Vic Norris).

Figure 8. (a) The second largest iolite gem rough in the world (1,714 carats) sits adjacent to the first three iolites faceted from cordierite collected at Palmer Canyon in the Laramie Range.

During the examination of Palmer Canyon and Grizzly Creek, some other gemstones were found in the Archean cordierite gneiss, kyanite metapelite and corundum schists. Metapelites and vermiculites host gem-quality kyanite and gem-quality corundum (Figure 9). Some of the corundum produces white, pink and rare blue sapphire and red ruby (Figure 10).

Figure 9. (a) A variety of colored kyanite gems. (photo courtesy of Vic Norris) 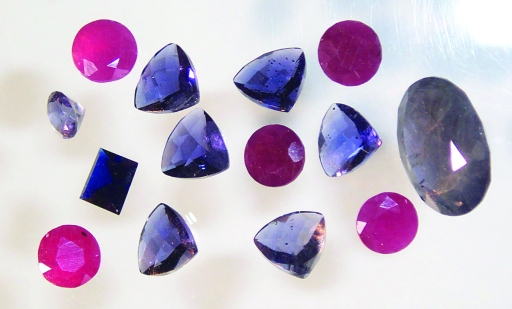 Wyoming is a potential source for considerable opal, jasper and agate. A very large opal deposit (within portions of 14 sections) was recently investigated by the WSGS at Cedar Rim south of Riverton (Hausel, 2005a, b, c). The opal is dominantly common opal with some fire opal found in the northern part of the field with traces of precious opal. The presence of the precious opal in secondary, cross-cutting veins suggest a possibility for more extensive precious opal in the district (Figure 11).

Hausel, W.D. 1998a. Diamonds and mantle source rocks in the Wyoming Craton, with a discussion of other US occurrences. Wyoming State Geological Survey Report of Investigations 53. 1-93.

Hausel, W.D., 2006b, Minerals and Rocks of Wyoming, A Guide for Collectors, Prospectors, Rock Hounds, and the Layman, WSGS Bulletin 72, 125p.

Hausel, W.D. and Sutherland, W.M., 2006 (in press), Gemstones of the World: Geology, Occurrence and Exploration: Society of Mining Engineers of AIME (submitted – 2005).